Beyond Deepwater to Charleston


From the end of the Virginian Railway at Deepwater, to the end of Passenger Service at Charleston, by menas of the Chesapeake & Ohio and the New York Central railways﻿ 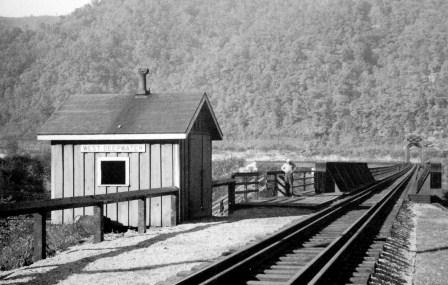 
The VGN Heritage Trail Historical Marker for Deepwater is located at the Church of Living Water, formerly Deepwater United Methodist Church. The church is on the south side of route 61, Deepwater, and on the east side of the VGN’s connecting track to the C&O. The attractive church sits on the side of hill, fronting 61 with the VGN on a side. 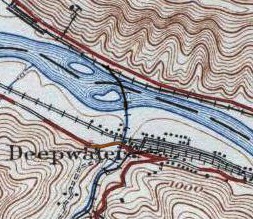 
There are four significant locations in this area:


· C&O Deepwater - Down the VGN trackage which passes beside the church, toward the river, is the site of VGN’s connection with the Chesapeake & Ohio railroad and yard. When built, this trackage was the mainline until the line connecting with New York Central on the north side of the Kanawha River was completed in 1931. Today, it is an active NS/CSX connection and yard. 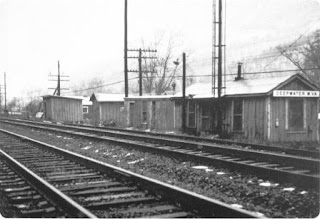 
· VACO Jct - Going the opposite direction up the railroad from the church is VACO Junction, created in 1931 when the NYC connection was completed. 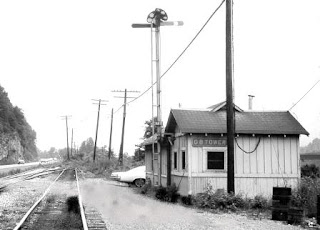 · DB Tower - Looking railroad west is the Virginian’s bridge over the Kanawha River, 1920.5 feet in length with VGN’s milepost 435 on the far, north side of the river. DB Tower stood within one hundred yards of the end of the Kanawha River bridge and was VGN’s connection with the New York Central railroad. It can be reached from Deepwater by traveling west on route 61 to route 6, turn right to cross the river on the highway bridge over and right onto route 60 east. 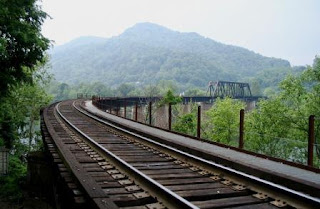 This view is from the NYC end of the Kanawah River Bridge. The NYC is behind the photographer and the C&O runs along the far side of the Kanawha River. 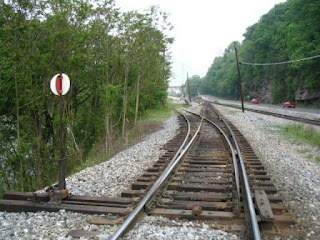 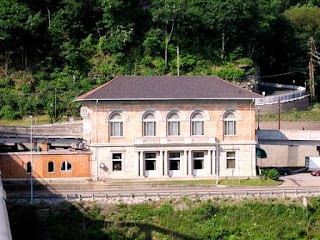 From the very early years of Virginian’s passenger train service in 1909 to January 24, 1952, the western terminus for passenger trains was in Charleston, West Virginia, a distance of 466 miles. From October 10, 1909 to 1931, Virginia’s trains called on Charleston using the Chesapeake & Ohio railroad station.   Situated on McCorkle Ave. SE (route 61) and beside South Side Bridge, the C&O station pictured above was built in 1905. 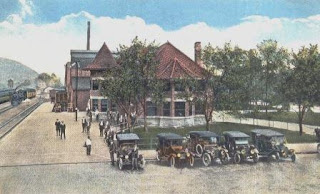 After 1931, when the VGN Kanawha River bridge was completed, VGN’s passenger service to Charleston was to the New York Central station. The NYC was at the end of Brooks Street and in the 1200 block of Smith Street in downtown Charleston. Baltimore & Ohio Railroad’s passenger trains also called on the NYC station. In the 1908 postcard view above, the view is looking east and Interstate 64 would be built to the left of the railroad. 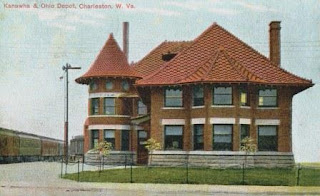 The NYC station whose build date is unknown, had a very interesting history itself. The Ohio Central had built eastward along the north bank of the Kanawha River to reach Charleston in the 1800’s but it went into receivership in 1883 and was sold to the Kanawha & Ohio in 1885. In 1889 the K&O went into receivership and was rechartered as the Kanawha& Michigan. The K&M then extended east of Charleston to Gauley Bridge by buying the Charleston & Gauley Bridge Railroad. The K&M was an independent operation, but was controlled by the Toledo & Ohio, later the Hocking Valley. The C&O acquired a controlling interest in the Hocking Valley , however in 1914 the US District Court forced the C&O to sell the K&M under terms of the Sherman Anti-Trust Act. Control passed back to the Toledo & Ohio Central which was leased by New York Central in 1922. Thanks to Ross Hunter for the NYC station details.
Posted by Aubrey "Junkman" Wiley at 9:14 AM